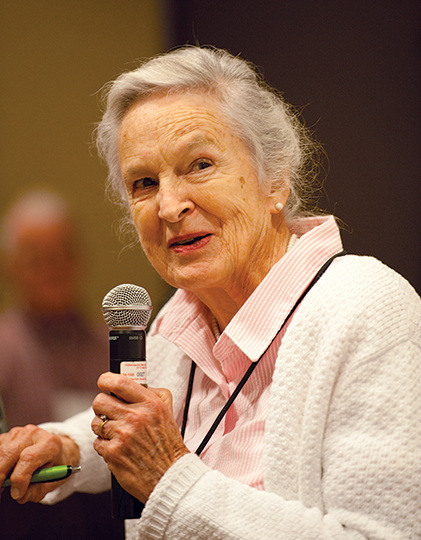 I JOIN ROSE MARIE IN WELCOMING YOU MOST HEARTILY TO ROCHESTER, AND WAIT TO TELL YOU A LITTLE ABOUT THIS PLACE AND ITS HISTORY.

Through our city there runs a river. It is the Genesee not world famous, but highly significant as the locus of major social, political and cultural changes in this country. Along the banks of the Genesee River the five tribes of the Iroquois Nation traveled, hunted and fished. The making of peace among these Native American people — the Cayuga, Oneida, Onondaga, Mohawk and Seneca — was a remarkable achievement, pulling them on the road to ways of self-government which some of our Founding Fathers studied.

A fact little known is that the Great Law of Peace of the Haudenosaunee, the people whom the French labeled the Iroquois,influenced the shaping of the United States government through their values of liberty, individuality and freedom. Furthermore, in the 19th century, leaders of the Women’s Suffrage Movement learned much from the Haudenosaunee women about their powerful role in the governance of the tribes of their nation.

Today, here in our meeting room, boughs of white pine-the Haudenosaunee symbol of peace — symbolize our connection to these native Americans.

When you step out on the terrace of this convention center, and look across the Genesee River, you will see the very building in which Frederick Douglass, the great abolitionist, printed and published his newspaper, The North Star. He lived and worked in Rochester for 25 years, refining his stand on the abolition of slavery and giving some of his greatest orations. At his request, he was buried in Rochester’s Mt. Hope Cemetery.

Not many blocks farther on, is the well-preserved home of Susan B. Anthony, that indefatigable worker and leader of the women’s suffrage movement, and a personal friend of Frederick Douglass.

This is our inheritance as we gather by the Genesee River. We come from many paths, but the legacy of these great people — leaders and pioneers — belongs to us all.

Now for a personal word, and a few historical notes about how this Pioneer Movement came to be.

One of the great things about reaching elderhood is to think back with wonder at the ways we have met people and the paths we have each walked, and how our paths have converged. It was probably 15 years ago when I first met Barry and Debbie Barkan, twelve years ago when I met Joanne Rader. In the last six years, I’ve come to know Bill and Judy Thomas and Charlene Boyd and Bob Ogden. As I met these people who were thinking and practicing new ways in nursing homes, with vibrant visions of what life can be in long term care settings, I kept telling each one that she or he should know the others.

My friends and colleagues at the National Citizens Coalition for Nursing Home Reform, Elma Holder and Sarah Burger, who knew Joanne and the Barkans long before I did, had a splendid idea. They invited them all to compose a panel on nursing home culture change for their 1995 annual meeting. The warmth of this panel’s reception and the desire of these pioneers to examine the commonalities in their four approaches, resulted in the first gathering of what we now call the Founding Pioneers, here in Rochester, March 1997-a gathering made possible by two Rochester organizations, Lifespan as sponsor, and the Daisy Marquis Jones Foundation as funder. The report of that 1997 meeting, which we refer to as The Yellow Book, is available at this meeting.

Subsequently there have been gatherings in Seattle, Oshkosh and San Francisco. From the start we have had the presence of regulators, advocates, legal specialists and researchers, as you will find in the case in this, our first conference. And today we gratefully and proudly welcome family members, and most important of all, residents themselves.

We gather in this place, remembering the legacy of those who lived and worked along the Genesee River in earlier times, let us resolve to be open to the vision, prepared to work for change in the way we live and work together in nursing homes and all places of long term care, and ultimately to bring about sea-change in tis country’s view of elders.

It is a matter of great urgency for all of us to discover, affirm and make possible meaning in our lives as elders in this society. Let us, and the many more who will join us, resolve to be instruments of changing the life of our people as the Haudenosanee, Douglass and Anthony did in their days.

The road is long, the work arduous, but often joyful. Let’s remember our legacy: “There must be struggle,” said Frederick Douglass in his words and his life. “Failure is impossible,” said Susan B. Anthony. And may we, in the spirit of the Haudenosanee blessing, come to be of one mind and one heart as we make the journey that lies before us.

Check out the values, principles and practices  that were a part of the report written by the founders back in 1997. That was 20 years ago, yet they remain as real and fundamental to the movement today as they were when first written, and they will continue to guide us as we look to the next 20 years.

The Yellow Book, the report of the 1997 meeting, is no longer in print, but is available as a downloadable file in the Pioneer Network Website Resource library.