Six years ago after more than 20 ambassadors returned from the Pioneer Network Conference held in Jacksonville, Florida, team members were struck by countless new points of inspiration. The Music and Memory program, centred on the idea that personalized music for people living with dementia can have a transformative impact in their lives, was among them. 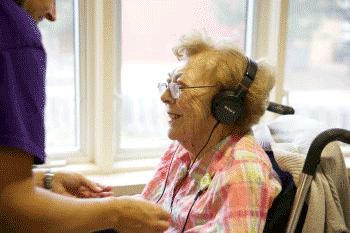 Music and Memory is one of countless programs and concepts Schlegel Villages learned about through its time at the Pioneer Network Conference.

Today, Music and Memory is a signature program within the villages; it is simply part of life in so many neighbourhoods and those who know its value continue to spread the message.

The Java Music Club followed a similar path to the residents of Schlegel Villages. Team members attending the Pioneer Network Conference that same year met Java Music Club founder Kristine Theurer and were instantly struck by the program’s premise. The unique, mutual support program helps residents deal with sometimes difficult, emotional challenges and provides an opportunity for them to give of themselves to others, which is a powerful way to maintain a sense of personal self worth. Had team members not met Kristine, they may not have found the program six years ago. Today, however, it is a central aspect of life in many neighbourhoods as a signature program.

The idea of bringing more peace to neighbourhoods by eliminating the use of alarms in beds and chairs; the concept of removing the locks on doors in neighbourhoods people living with dementia call home; tracking sleep patterns and assess and minimize the amount of nighttime disturbances residents face; these ideas were all inspired by sessions held in Pioneer Network Conferences past.

The value is hard to quantify, for these programs and ideas have spread to so many people connected to the villages thanks to relationships built at the Pioneer Network Conference.

As a writer, I was impacted as well. In Jacksonville I met Barry Barkan, one of the original Pioneers within the network and founder of The Live Oak Institute in Berkeley, California. He spoke of culture change and the restoration of elders to a place of reverence in our society; he spoke in a way that inspired me to want to do more. That night I considered the role of a storyteller in the culture change movement, and I decided then I would pursue a new direction in life.

Within a short few months, I’d left my job to focus all my efforts as a storyteller on the culture change movement from within Schlegel Villages and the Schlegel-UW Research Institute for Aging. Without Pioneer Network, that inspiration may never have come and my path could have been much different.

This is why Schlegel Villages continues to invest in the conference and why 16 more people — team members, residents and family members — will travel to Denver, Colorado Aug. 12-15. Change comes through the inspiration of others and the realization that people around the world share similar passions and hope for the future.

Pioneer Network brings these people together.