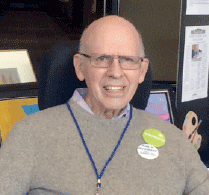 This article is the transcription of a speech that David Kent, resident of Schlegel Villages, made to the Resource Development Advisory Group Meeting, a part of Health Quality Ontario, on January 11, 2018. This committee is made up of 22 individuals, representing government, stakeholders (primarily from the clinical support side of health and wellbeing), an Administrator from the Ontario Long-Term Care Association, the president of the Family Councils of Ontario and 2 representatives from the Ontario Association of Residents Councils. This speech was also heard by two directors of the long-term branch of the Ministry of Health for Ontario.

I will highlight four main words in this talk and they are: identity, culture change, person-centered care, patient, and perception.

Words carry important messages: They help us express feelings. They stir memories and carry powerful images. Words can define a culture and a way of living.

When I moved into The Village of Erin Meadows on August 6th 2014 I thought I lost my identity. I left my wife of 50 years. I felt lost and empty. I was amongst strangers. At 76 I was the third youngest of a neighborhood of 30 people. I did not leave my room except for meals for three weeks. I said to my wife “I don’t know how to survive here, it’s a house but not a home”.

What person-centered care does is give a person an identity; it evokes empathy and elicits a feeling of importance to the person.

This new approach to the health system was started in the United States in the 1970’s with visionaries like Barry Barkan and his Live Oak Institute of regenerative healing through social interaction and Dr Bill Thomas and his wife Jude with their efforts to eradicate the three plagues that existed in the nursing homes. They are boredom, loneliness, and helplessness.

The Canadian Visionary for this culture change idea was Ron Schlegel in his first Kitchener home in the late 1970s which he called a village.

In 1997, 33 American culture change pioneers met in Rochester New York for three days and debated all their ideas of how they could make nursing homes more like homes and less like institutions.

Central to their plans was a philosophy of person-centered care in a holistic setting emphasizing the individual more than the task. Their organization is called the Pioneer Network.

Because of this philosophy, I was given the opportunity at the Village of Erin Meadows, which is one of the Schlegel homes, to rejuvenate my teaching career. I had been an educator in the Toronto high school system for 35 years and thought that career was over. I was empowered to start to teach seminars on Canadian history, art, sport, and nature. I had the help of a Recreational Therapist and a Volunteer. Our class consisted of fellow residents. The class size was usually 15-20 and I had 5 in that class over 95, of which one was 100 years old. Over the last 3 years we have taught 78 seminars. This has given me a purpose. This has involved me in a positive way for the first time in 20 years. Because of this empowerment I have become the president of the Residents’ Council and facilitate 3 high school programs.

The culture change philosophy of emphasizing not only the physical care but the emotional and spiritual care has changed my life and the life of my many fellow residents.

In the terms of the reference draft regarding patient engagement. It is described as the following: “Health quality Ontario views patient #1, Caregivers and public engagement as central to its work as the provincial advisor on the quality of health care Ontario.”

Where is resident engagement?

It is a footnote to the word patient.

“Depending on the health care setting or context, patients may also be called residents, clients, customers, or consumer survivors.”

We at OARC represent the Resident Councils of 627 homes who in turn represent approximately 100,000 residents who occupy 7800 beds in 2017. We find the exclusion of residents, as being one of the central pieces for a quality of health care in Ontario, as insulting, demeaning, and quite shocking. Unlike a patient we in long term care homes have left our homes not by choice to try to adjust to a new life in a permanent setting. Many of us have memory issues. Most of us have difficulty expressing ourselves. But we are the elders in this society and we deserve to be treated with respect and dignity. We are not a footnote!!

The (Ontario) government has given LTC homes a high priority by spending tens of millions of dollars to modernize over 300 homes, create 5000 new beds and redevelop 30,000 existing beds by 2025. They understand there is a severe crisis to meet the demands of an aging society.

They have increased the wages for front line workers and the money allotment for quality of better food. They have hired a hundred new inspectors who will be introduced to the new culture change language.

“Your beliefs become your thoughts”

“Your thoughts become your words”

“Your words become your actions”

In 2016, myself, my Personal Support Worker caregiver, and the executive of Ontario Association of Residents’ Councils (OARC) attended the Health Quality Ontario (HQO) conference. We went to see a session on story telling. It was a panel that consisted of a patient who talked about the special care he got from the nurses, a lady who talked about homelessness in Toronto, a lady from the United Kingdom who described their health system and an Analyst. After the session was over in a question and answer period I told my story of how my life had changed thanks to culture change in the Village of Erin Meadows. At the conclusion, there was a large ovation and the panel thanked me and a lady from a long term care home came to me and said “Finally there is somebody talking about us.”

Pioneer Network wishes to thank and congratulate David Kent for his tireless work as an advocate for residents living in long-term care. Your work may be in Canada, but it’s impact has no borders.