This past summer, Dr. Susan Wehry, a wonderful friend of Pioneer Network, spent most of her time as primary caregiver for her beloved Mother, who died on September 10, 2021.

We are honored that Susan has shared this special tribute with Pioneer Network and our readers, a beautiful story written by her mother, Maxine, in her final days, “in hopes that she was learning something that might be useful to others”.

Thank you, Susan, for sharing the treasure trove of reminiscences that were unlocked as your mother looked at her hands. 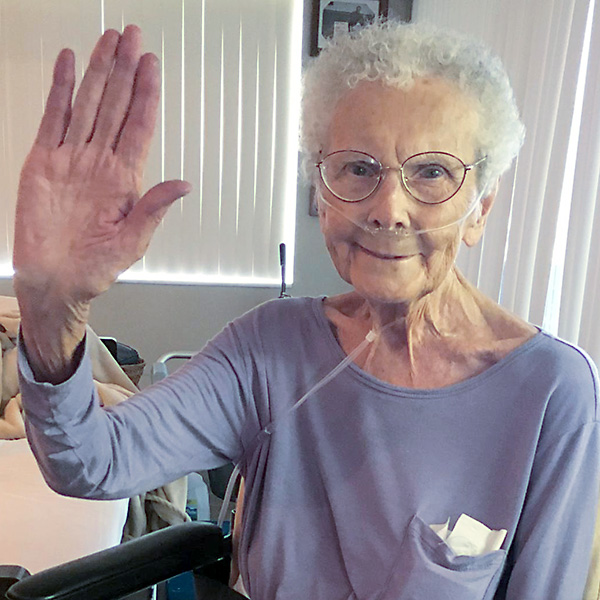 Someone recently said to me ‘you have such beautiful hands,’ “Beautiful?!” I was amazed. “I cannot believe you’d think that. These old hands are so scrawny and bony and have big veins popping out of them!” ‘But I do, she gently responded. ‘You have long, delicate fingers and … just think what all they have done’. “Maybe to you…” My voice trailed off as I held them up and started thinking about what they had done.

Whom did they first touch? Probably my Mother. They patted her face. They patted my Grandma’s face. How I loved Grandma Smith, who cared for me after my mother died when I was two. Grandma must have gotten a lot of pats on her face from me. Hannah. Hannah Jane was her name. She was a sweetheart. I remember helping her roll dough with a rolling pin so she could cut out sugar cookies. I remember her handing me a piece of dough so I could shape it into a biscuit. She let me gather twigs to help her start the fire for the day’s cooking. Lily and Grandma said I was the best little twig finder. I was so proud.

When I was four, my Dad married a woman called Anna. Now I had a stepmother. I really missed my mom. I wanted my mom to come back, so I never really got that close to this woman called Anna. She and Dad had six boys but she kept saying, she always wanted a girl. Eventually, she took her granddaughters under her wing and treated them like they were her daughters. Looking back, I think, ‘she took five orphan kids and raised them. Three of us were girls. I wonder why she never thought of me as being her daughter.’

My hands spent a lot of time in the water and in the ground. They dug dirt to make mud pies and to plant flower seeds with my cousin Betty. I like to think these hands helped my Mother plant flowers. She loved flowers. I do too. I remember always trying to find a spot to put the flowers just to make everything look pretty.

Living on a farm wasn’t easy. We had to work hard. Even in the dark. All day. Planting, planting, planting. Tomatoes, green beans, potatoes, peas and melons. Once the tomato factory came to town, it was our job to pick the worms off the plants. These hands hated that chore, too.

After harvest time, we washed the dirt from vegetables and fruits, snapped green beans, removed the strings, and peeled our bounty for canning, applesauce, applebutter and pies. These hands squeezed grapes for jelly and took the fuzz off peaches. My hands didn’t like the feel of that fuzz but oh imagine tasting fresh peaches in the dead of winter.

Melons were big in my family. Have you ever planted melons? As long as you planted them in sandy soil, it was an easy job. But boy was it hard work in a field with hard ground. You had to take clods of dirt and smash them against each other to loosen it. At one time, my great grandfather was one of the biggest melon farmers around. In fact, Smith’s Switch, the little station where the train switched tracks after leaving Vincennes, was named for him. It was there my family and the other farmers would load their wares on the train bound for Indianapolis to be sold to fresh market vendors. I helped drag baskets of cantaloupe, which the boys would then load onto the wagon. Then they’d transfer them into boxes they’d made. These hands wanted to swing a hammer too but Dad said I was too small. I don’t think he was right about that. I knew I could do what my brothers did.

The cows didn’t like me to milk them. I don’t know why. I didn’t care, I didn’t like doing it. Perhaps my hands were cold even then. They sure are now! Anyhow, when it was milking time, I would just go back in the woods, find the girls, bring them home, put them in the barn and let somebody else take it from there!

In school, these hands held a big fat pencil to make perfect letters. They had to be perfect or I was unhappy! They wrote the ABC’s so that I could learn to make and read the words I wrote. I batted balls, climbed trees and swung from ring to ring. I felt free, like a monkey. I even tried to learn to type. I wasn’t very good at it. At 97, I’m still not very good, but I can hunt and peck and write stories.

These hands scrubbed floors and washed windows and helped my brother Woody wash and shine his Model T Ford. I loved doing that. He would usually let us girls ride in the rumbleseat to see Grandma. He would stop at the store in Carlyle on our way to Meram and let us pick out a candy bar. My hands always reached for a frozen Denver sandwich full of nuts and caramel and it lasted forever. I usually had half left when we got to Grandma’s.

These hands scrubbed floors and washed windows and helped my brother Woody wash and shine his Model T Ford. I loved doing that. He would usually let us girls ride in the rumbleseat to see Grandma. He would stop at the store in Carlyle on our way to Meram and let us pick out a candy bar. My hands always reached for a frozen Denver sandwich full of nuts and caramel and it lasted forever. I usually had half left when we got to Grandma’s.

I went to beautician school and these hands shampooed a lot of heads. When I was 20, I went into the Marine Corps. I wanted to serve my country. It was World War II. How many times did these hands salute? How many heads of hair did they wash for those two years I served as a beautician?

I had five children and oh my goodness. These hands patted bottoms and held books to read bedtime stories. They washed sheets and ironed pillowcases. They waxed and shined the floor so my kids would be proud to bring their friends home.

Perhaps the most important thing these hands have done is pray. And bow. For peace, love and happiness. 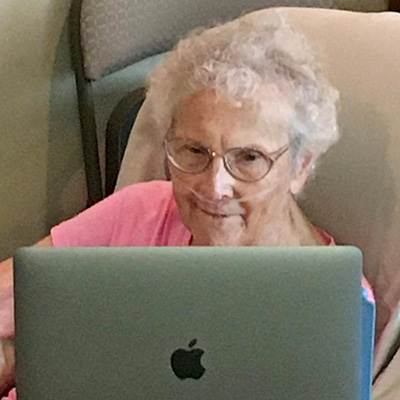 I looked at my hands closely this morning. I washed my hands with a wet wipe, and clapped them to dry. It made me think ‘I wonder how many times I played pattycake pattycake baker man with Lilly, the lady who lives with my Grandma’. I thought, did I ever have nice smelly soap growing up or just the homemade lye soap? I know we had a big round galvanized tub. Did we get in it? I don’t remember. I do remember jumping in the horse trough getting the sweat and everything off my body after working in the fields.

Now someone else washes me and my hands with fine smelling soap and puts lotion on them and tells me how beautiful they are. If someone tells you, you have beautiful hands, listen. Old hands, I love you. I’ve had you for 98 years. Thanks for all your years of service.