Jared Bloomfield
Manager of Field Operations for Wish of a Lifetime

For years, I worked in senior living, desperately searching for ways to honor older adults, showing them how important they were to their families, communities and the world, always trying to match the feeling I got when celebrating my very own grandmother.

I was raised in Minneapolis, Minnesota, surrounded by incredibly loving, deeply involved relatives. My childhood included twice weekly trips to my grandmother ‘Babi’s’ house, who lived five minutes from my house. My Babi was the person who taught me the value of a long walk, a close baseball game, and most importantly, unconditional love: a blessing that so many grandparents have bestowed onto their grandchildren and one that I take with me to this day. My Babi was raised a young Jewish girl in Russia, during the Pogroms, a time where Jewish people were being forced into poverty and isolation and often starved and killed. Her journey to Canada and ultimately to the United States was a long road, but this trauma never took away from her kind, gentle nature that persevered for the rest of her life.

My Babi was a woman of simple pleasures. Her monthly meal with her grandkids at Applebee’s or the local deli was the delight of her life. After raising four children and playing a very active role in the lives of her ten grandchildren, she never asked for anything, other than as much time with her family as she could get. My Babi, just like so many of our parents and grandparents, would never think to explore her dream and would not even know where to start if she was asked; this sense of humility and minimalism does not mean she did not have a wish, though. In retirement, my Babi filled many of her quiet afternoons in Minneapolis watching ‘WGN,’ a Chicago based station that played throughout the Midwest. WGN famously showed Chicago Cubs baseball games and my Babi immediately gravitated not only to the Cubs, but to their colorful commentator, Harry Caray. Caray was an incredibly expressive commentator, whose presence made his audience feel part of something greater. Over the years, my Babi started to become captivated by him, soon setting her calendar to ensure that she never missed a Cubs game. Harry Carey awakened a sense of community in my Babi that she had never felt before and lit a passion for baseball that would live on in her and her grandchildren for the rest of her life. 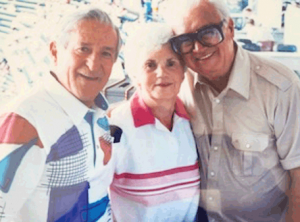 For my Babi’s 70th birthday, our family surprised her by sending her, along with Grandpa, ‘Zaidi’, on a chartered flight to enjoy her first ever Cubs game. My Babi had never been to Wrigley Field before. It wasn’t that she couldn’t, it was, just like so many older adults, that she never felt comfortable asking for something that was not completely necessary. What was already a surprise of a lifetime became even more exciting with an invitation from a staff member in the middle innings to follow him to the broadcast booth; it was there that her and my grandfather were treated with a special meeting with Harry Caray. My Babi had never felt more seen and loved than she did that day. The story of her five minutes with Harry Carey gave her a light that was not there before. Not only did this experience provide much needed joy and solidified her lifelong passion for baseball, but it did something much deeper: it gave my Babi a story to tell. So many elders are lonely, with millions of older adults experiencing isolation in some form. Sometimes, relieving isolation is as simple as empowering an older adult with a unique life experience that they can share with friends and family. My Babi told her story about Harry Caray on an almost daily basis, and the photo of her, my grandfather, and Harry Carey at Wrigley Field, which is attached to this article, hung by her bedside until the day that she died.

Without even knowing it, our family saw the incredible value of granting a wish for an older adult many decades ago. As the Manager of Field Operations at Wish of a Lifetime from AARP, I am so proud to work to spread our mission all across the country, working to empower volunteers to submit wishes and honor older adults in the same way that my Babi was honored many decades ago. Whether the wish is simple like a family reconnection or more built out like sending a veteran to Normandy, Wish of a Lifetime is all about honoring our wonderful older adults providing them with a lasting memory for them to hold on to.

As I prepare to moderate the September 22nd Pioneer Network A New Look at Community Commitment: It’s All About Making Connections session, I think about my Babi and the power that one day of connection can have on the life of a senior. I look forward to bringing both the joy and pain that she dealt with in her older years as I know in so many ways, she represents what we are all fighting for in this work: creating that everlasting moment of joy that all of our elders so badly need and deserve.

One comment on “The Importance of Connections: Why they need to be a part of everyday life”